This is a clone of one of the first video games ever made: Pong.

I implemented three game modes; single-player with three difficulties of AI, two-player local, and two-player networked (multiplayer). The multiplayer is really horribly done and almost too laggy to even be playable, but it does work once you clear a specified port in your router settings.

As usual, I wanted steer clear of swing, and therefore created my own button class, with the ability to use either a coloured background, or an image.

This was just a personal project, which I worked on over the span of several months. Overall I’m pleased with the way it turned out, and other than the horrid state the networking is in, I feel this game is finished. 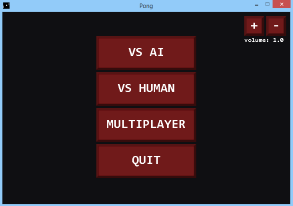 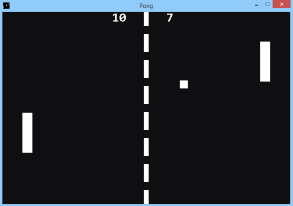 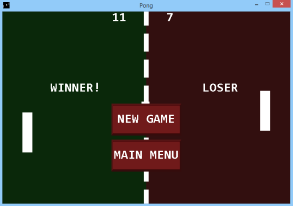 All games hosted on this website which were added after this one can be played in your browser, but unfortunately this and all games before this require a download to be played. So if you don’t trust me enough to download a suspicious jar file, feel free to try any one of my newer online games on this page

The source code can be found on GitHub (Java)